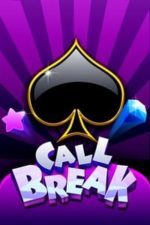 Call Break Multiplayer is a Classic and widely popular card game and guess what? you can play online too! Yes, Call Break features online multiplayer for endless hours of fun with friend and the family. Call Break is a trick based card game which is very similar to the the game Spades. The best part about our Call Break Multiplayer game is that it is FREE! So what are you waiting for? Download Call Break and have fun! A 52 card deck is used and is played between four players. The is widely played in India and Nepal. In the game of Call Break, a hand is called trick and a ‘call’ instead of a bid. The objective of the game is to break other players in the game, meaning to stop them from getting their ‘call’. Points are calculated after each round, and at the end of 5 round the points are added, and the player with the highest points will win. In Call Break, after a player completes their call, player next tot dealer will be making the first move, player can throw any card, and the suit thrown by this player will be the suit that will lead and each player after him will have to follow the higher rank of the same suit, and if they don’t have it, they mist break this suit by a ‘trump’ card (a spade of any rank), if they do not have a spade, they can throw any other card. The highest card of the suit that is led will capture the hand, but if the led suit is broken by a spade, in the case the highest ranked card of spade will capture the the hand. The person who wins the hand will lead to the next hand, this way the round continues until the completion of 13 hand and the next deal will then begin. The best part about the Call Break is being able to connect with your friends an play for hours at a stretch. Bored on the Subway or sipping on coffee, just take our Call Break Multiplayer and game on! Features: 1. Online Multiplayer support 2. Very Intuitive interface and gameplay 3. Fast paced gameplay Download Call Break for your phone and tablets today and have endless hours of fun. Please don’t forget to Rate and Review Call Break