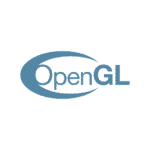 OpenGL or “Open Graphics Library” provides developers with a wide array of functions to render 2D and 3D graphics. Although largely known for being an API or application programming interface, OpenGL on its own is just a specification that determines the output of each command.

OpenGL’s main purpose is to interact with a system’s Graphics Processing Unit or GPU to produce real-time graphics rendering. It is commonly used as the primary graphics library of 3D games thanks to its cross-platform nature, which makes porting games easier. CAD programs, such as Blender and AutoCAD, also use OpenGL as their graphics library.

Many GPUs, both dedicated and integrated, are optimized for OpenGL and is supported in nearly all modern systems. Although most systems already come bundled with the software, some of its later versions require the most updated GPU drivers. Users are advised to keep their drivers up to date to ensure that their system can fully maximize OpenGL’s features.

OpenGL’s biggest selling point is its wide accessibility. Indeed,  its own support of extensions backs up the claim. GPU manufacturers can use extensions to implement rendering techniques that are not included in OpenGL’s own specifications.

Thanks to OpenGL’s wide range of platform support, it’s a prime choice for game developers who deal with cross-platform rendering of 3D images. It has a steep learning curve, however, and will require intense studying to render images from scratch. That said, its comprehensive library and support of extensions still make it one of the most accessible graphics libraries out there.